Do you see the astonishing world we live in, or do you focus on the gleeb-glob? 😳

The gleeb-glob (i.e. crap, shizzle, stress, yuck) tends to take our attention for most of the day, doesn’t it?  The deadlines, the elusive money challenges, the noise, chaos, and clutter of our current, modern lives. But between traffic, bills, arguments, and turmoil, lies… the SPACE. The space between the musical notes. The serenity. The gap. The Tao. Described by many writers as the stillness, it’s what the meditators aim to experience and the prayerful long to discover. It’s what makes the music ebb and flow. And it’s what I consciously keep returning to when the gleeb-glob maxes out my tolerance meter.

The space basically means the room to listen. Not to our annoying, anxious, obnoxious mind chatter, with its measuring, comparing, describing, and judging. But to the Great Something that lies beyond all that. The gentle witness that is behind “I”. The infinite intelligence that we are all a part of. When you think “I want to feel good” who are you talking to? That is the ONE that cannot be disturbed. Author Joe Vitale calls it the “zero point”, where words, concepts, ideas, and clutter doesn’t exist. Just pure guidance and knowing. The awakened awareness.

I had a recent bonkers experience with the gleeb-glob that I am proud to say didn’t smash me like it would have in bygone days:

A couple weeks ago I was towing my travel trailer to the Oregon coast, with my 10-year-old granddaughter Orin perched next to me in the truck, and we pulled into a coffee hut. I thought I had plenty of clearance, but as I pulled away a loud CRUNCH made the coffee girl yell “Wait!” I stopped and attempted to back up, dreading what damage I may have done. The fan on top of the trailer had caught the edge of their little roof and the fan was cracked! Unfortunately, the trailer got even closer to the coffee hut when I tried to back up. After multiple attempts to inch it forward and back, I was jammed so close that I was about to rip off her little shelf. The coffee girl was very sweet, directing me between her other customers, and I had a superior opportunity to practice remaining calm, and not flipping out.

Orin was ultra-patient, not complaining at all, as I detached the truck, repositioned it and tried again.  Did I mention it was 97* outside? As I toyed with the idea of searching for a “man who surely would know what to do”, I realized the shelf was gonna rip off a side light, so I removed it, proudly using a screwdriver all by myself. 😉 The coffee girl brought out some towels because she could tell the trailer was going to scrape the post, and the two of us managed to ease my truck and trailer out after about 45 minutes of puzzling and sweating. I was finally FREE!! We all three whooped and high fived “girl power”!

I offered the coffee girl a large tip, but she refused to take it, even though I insisted.  She said “If I was in that position, I would have been grateful for someone to help me out.  Go and have fun on your trip.”  I was beaming with appreciation, and Orin and I were back on the road–after a few deep breathes. I was in awe of my own newly found ability to stay calm.

But that is not the end of the story! 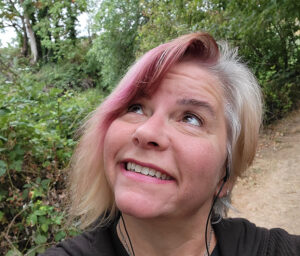 Once we pulled up to the campground the ranger said to just take any empty spot. I found one and a sweet man came and helped me back in. Being my first time of backing-in, it took about 15 minutes, but we finally got it and Orin and I were ready to hop out and start unpacking. Just then the clutch on my truck went out! Flopped down on the floor and wouldn’t go into gear. I was just wrapping my brain around this and when this guy pulled up and yelled for us to get out of his spot.

After trying to explain that I just took an empty spot, he told me that his name was on the post. Indeed it was, sort of hidden behind some branches. I didn’t know this was a thing. I said I would be happy to move but literally couldn’t move cause my truck had just quit on me. He started yelling at us to get our bleeping truck outta there. I asked him why he was being so rude. He proceeded to cuss and yell some more, saying “Why’d you even bring a sh**tty a** truck to pull your trailer, get your stupid a** out of our spot, etc.” I closed the truck door, turned to Orin and said “we need to just ignore this guy.  We’ll go up and talk to the ranger.”

While we sat there for a few minutes, this guy whipped his truck into the site next to us and started unpacking, loudly talking about how dumb we were. I took Orin’s hand and started to walk to the ranger hut. I told the guy we were going to speak to the ranger and I could try and call AAA.  He said “talking to the ranger won’t do nothing, and if you don’t get out of my spot I will yank you out.” So, at that point I calmly said to Orin “let’s just keep walking”. We explained the whole thing to the ranger and I told him how uncomfortable I felt with that guy next to me and that I would move if I could but I was stuck.  Tried AAA and they said it would be at least 3 – 5 hours because they were so busy on the coast. The ranger told me to just go ahead back to my camp and he’d deal with the guy and that we could stay put—no worries.

This time when we walked past, the disgruntled guy said nothing, but then the ranger was over at his site for about 20 minutes while we waited. Finally, the manager of the park came and told us another camper had seen the way he talked to us and she herself had tried talking to him but he was unreasonable, and she was calling the police. They came out and evicted the guy. WHEW! Thank goodness because I wasn’t feeling too comfortable spending the next 4 nights next to him.  And in the end the ranger and the manager were super sweet and extra friendly to us the whole time we were there, and we had pizza delivered to the ranger hut once we checked out. It was good karma, with a side of pepperoni!

In ONE day, I had the fascinating experience of seeing two extremes of human behavior and not letting crazy situations faze me. Orin even said to me later “Grandma, I don’t know how you stayed so calm when that guy was yelling at you.” I had the opportunity to explain about anger problems and mental illness as well as the fact that we have choices in how we react to people even when they are angry and unfair. Life lessons always unfolding around us, most especially in uncomfortable encounters.

Another issue that would have formerly left me troubled through the entire trip was knowing my truck needed repair. But somehow, and for literally the first time in my life, I just put it out of my mind until I needed to deal with it and chose not to worry. I just waited to call till check-out morning and miraculously, a local AAA driver just happened to be driving right past the campground when the call came in and he swung right in to check out the sitch. WHAT!?! And we were able to enjoy our 4 days of camping, ending with AAA towing my truck and trailer home, straight to my mechanic’s door. WHOA! (Which he fixed the NEXT day…very unusual.)

Strangely, despite the massive gleeb-glob, I walked away from that whole scenario feeling more confidant than ever in the SPACE, the untroubled peace that is within each of us…IF we choose to access it. I’m incredulous at the power of awareness, and the realization that we are NOT our thoughts and feelings, but the witness of them. This was an impactful series of incidents to really knock that idea home for me.

The teachers are all around us–in nature, relationships, movies, and even bitter furious fellows. But until we seriously “tune in” to the awareness station, we end up listening to the unpleasant music that grates on our nerves constantly. It’s an eye-opening moment to realize I’m the one with my hand on the dial.

“Awareness is like the sun. When it shines on things, they are transformed.”― Thich Nhat Hanh

Doing my best to live in the space,