Go Make Your Own Fucking Art!

Haters and bullies and trolls, OH MY!!

Okay so I know that many would consider that title RUDE.  If you are offended by strong language, this will definitely not be the hang-out for you!

But hey, I just used a vigorous curse word…I didn’t smack your baby!

I feel the need to spout off a little and hopefully those who are of a strong constitution can buckle up and come along for the ride.  I’ve found myself getting more “feisty as fuck” with each passing year! Hopefully you are too.

As I said in my last blog, Elizabeth Gilbert’s words “Go make your own fucking art!” have become my new motto.

I was recently the subject of an overwhelming cyber bullying attack (June of 2017).  At first, I had no idea why, but was suddenly hit with a few one-star reviews on my Garden of Ink Tattoo Facebook page, with no actual words.  Just the 1 star.

I was busy in meetings all day so didn’t have a chance to deal with it but by the next day I had over 150 negative, vicious comments and 1-star reviews before I had a chance to turn off Facebook reviews.  I spent countless hours reporting and blocking people over a few days.  They attacked me personally and commented all over my photos and posts.

Soon it was over 200, and then they moved to google reviews too (which cannot be turned off unless they are violent or threatening). They also went on to my student’s Facebook pages and made nasty comments as well as contacting two of my clients. (determined little nitwits!)

The thing that floors me most?  It was tattoo artists from across the country doing the bullying!! My OWN PEERS!

In general, the “reason” behind it was because I own a tattoo school and these other tattooers believe everyone should be forced to go through an old-school, harsh apprenticeship to “earn” the right to practice this craft and thus I am “degrading” and “dishonoring” the tradition of tattooing by having a school and using modern equipment.  They didn’t even care that schools are required and regulated in Oregon! The comments ranged from rude to threatening to downright filthy. I was quite in shock at how ruthless and ugly they were being to defend their way of thinking.

Those first few days I was puzzled, then hurt, then defensive, then angry! My clients, friends and family came to my defense with lightning speed, which was AWESOME. (Danny, my son-n law REALLLLY raised a ruckus…I loved his “HOW VERY DARE YOU” attitude.

But I personally chose NOT to engage with them. I didn’t say ONE WORD to any of them, and just countered the mean google reviews with a pat answer.

In fact, after it got up over 300 comments I began to literally LAUGH at the ridiculous, mean, awful things they were hatefully spewing.  I couldn’t even fathom why someone would waste so much energy directing hatred instead of just making their own art.

And my family and friends were shocked that I was so calm, because they were all pissed! (Especially my sons…defending their MAMA.)

My feelings are as follows: A. I am an artist no matter what the FUCK you think. B. There is room for EVERYONE who is determined to tattoo and multiple paths to get there. C. My clients love me. D. My students love me. (well except that one asshole). E. How dare you act as if you are the almighty deciders of how the tattoo industry should be run. F.  is for “Fuck you”.

One of the weirdest parts of this is, my friends, students and clients know me as a kind, caring, generous, positive and Fierce Pollyanna.  These trollers have no clue of who I am, my journey, my reasons, motivations or the difficult path I’ve had to get where I am.

And yet they feel they are my judge and jury with comments like “you should break your thumbs”, “let’s bring her down”, “My dick does better tattoos” or “your art looks like a 5th grader did it.” 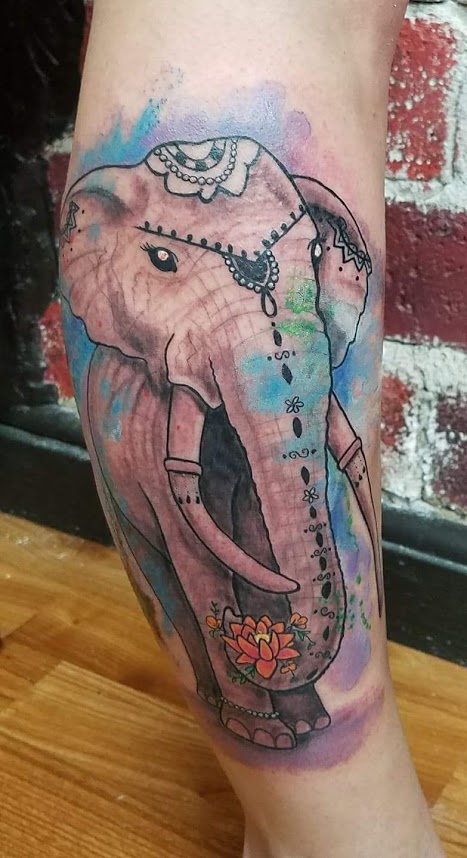 Here is some of my “crappy” art they tore apart but the client was over the moon happy! (Watercolor Elephant tattoo 2017)

My inclination is to feel “hey if they are picking on me I can just count that as a measure of my success.”.

(My Pollyanna sunny side has tried to find a positive spin to this brutal verbal attack.)

Ok so first of all, if you were a painter and went to college or a private art school no one would say to you “you should NOT pay your way through, you should SUFFER for your art and only train through a traditional apprenticeship such as in the days of old, where they will treat you like crap OR you are NOT really a REAL painter!”  And secondly, no one would say your painting was shit if you didn’t create it in the same way, style or using the same tools as they did. And thirdly, no one would say you weren’t a REAL painter just because you didn’t take art history or uphold the traditions of all those who came before you. And lastly, all art training, styles, tools and technology change over time!  Why should tattooing be any different?

The majority of the meanies said things that implied I am hurting all tattooers and scamming the students because I am breaking with traditional apprenticeships.  Also, I am dishonoring all those tattoo artists who came before me. And because I use a modern rotary tattoo machine (and teach that to my students) I am apparently an idiot and I am “shitting on the whole tattoo industry.”

HOLY MF, people get a life.  Things change. Traditions change. People are allowed to make their own choices.  Just because you think you are right doesn’t make it so and certainly does not give you the right to be hateful, judging and threatening to someone who doesn’t believe the same as you.

I was told in a private message: “I’ve been tattooing for 30 years and what you are doing is an abomination.” REAlly? SeriOUSLY?  Me tattooing my happy clients and teaching my happy students to do the art they love is what you consider an “abomination”?

How bout your spewing hatred like a gutless chicken behind a computer screen–Now THAT is actually vile and abhorrent!

One of my clients said it best when he commented: “It’s so ridiculous how they are bashing you for not doing things the traditional old school way, but they are using Facebook to tell you this.  They should be using a rotary dial telephone to call you up and threaten you instead.” (OMG I laughed so hard when he said this!)

So instead of crying, being hateful in return or shrinking back…I made this video, ala Jimmy Kimmel’s “Celebrities Read Mean tweets”.  CHECK IT OUT!

And they wanted to ‘bring me down’ shatter my confidence and crush my reputation.  But hell, all they did was make me more feisty and KICK ASS than ever.  I’ve literally written more, created more, painted more and drawn more in the last few months than in years AND increased my income through my own IDEAS. Take that bitches!!

And of course there is this piece of advice from Wayne Dyer I have always tried to live by: “Your reputation is in the hands of others. That’s what reputation is. You can’t control that. The only thing you can control is your character”.

If you have a moment, join my facebook group to continue the discussion or comment below.  I’d love to hear how you have stood up for yourself!!  I’m seriously starting a “Feisty as Fuck” movement!!  Hee hee

Be fierce. Be kind. Be BADASS!

PS: Let me know what is the biggest challenge in you not being the person you want to be.  What is holding you back?  I’d love to help!